Como Park Zoo was founded in 1897, making it one of the oldest zoos in the Midwest. It grew slowly over the years add a few more animals at a time. Like so many other zoos in the Midwest, the 1930s brought significant changes to the zoo. Several new exhibits were built, and many animals were given a new home after the Longfellow Zoo in Minneapolis closed in 1934. The next 40 years were hard on the zoo, and it was in danger of being closed several times. That all changed in 1976 with a new master plan for the zoo and new commitment from the community. Since then, many new exhibits have been built, the last being the Gorilla Forest exhibit, which opened in 2013.

The zoo is home to over 1700 animals from 66 different species. Some exhibits of note are the Tropical Encounters Exhibit, Gorilla Forest, Large Cat Exhibit, and Polar Bear Odyssey. A new exhibit with larger enclosures for the seals and sea lions is currently under construction. The bison, caribou, arctic fox, and Dall's sheep are in the Old Hoof Stock Building, which is one of the oldest exhibits still in use. It is accredited by the Association of Zoos and Aquariums (AZA) since 1986.

Como Park Zoo is involved in 46 different Species Survival Plans, including Emperor Tamarin, Lesser Kudu, and Polar Bear. The zoo is the manager of the studbook for Crowned Lemurs. A studbook is a database of all the lemurs in North America and is used to maintain genetic diversity. Another significant effort of the zoo is to encourage recycling through works of art made from recycled material installed throughout the zoo. 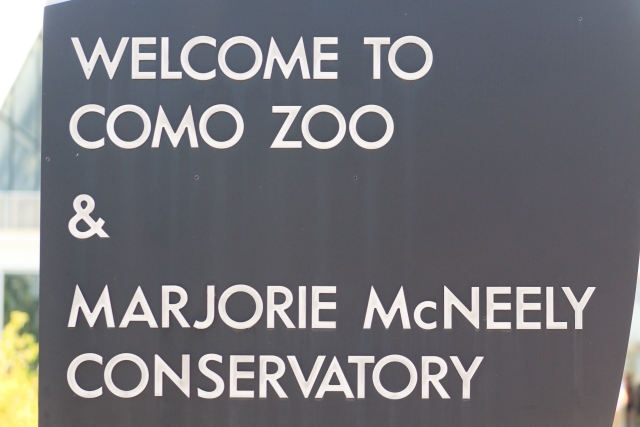